Let There Be Light!

Ray-tracing algorithms highlight the vital importance of lighting to the interpretation of a scene, whether it be the stark bright light of the sun, the more diffuse glow of the blue sky, indirect light reflected by other surfaces, or light glowing or shining from luminiferous objects. We see the light not merely as a feature in the scene, but as a directed, causal process, that intimately links the light source with the patch of the world that it illuminates: we perceive the light as the causal source of the illumination of the scene. 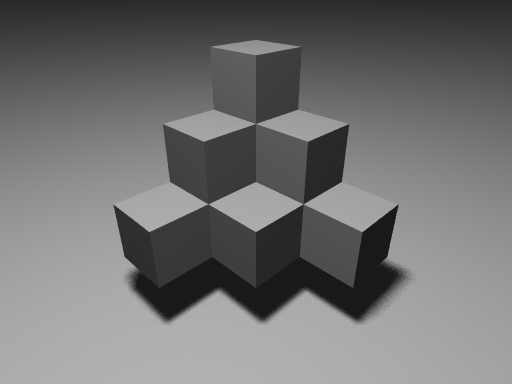 However at the same time we also perceive the reverse inference:  The illumination of the scene implicates a light source illuminating it. And the nature of the illumination reveals information about the light source, even if the source itself is currently invisible, or out of our field of view.

The direction of the shadows in the scene point backward from the occluder back toward the light source, even if the light source is outside the field of view, giving a distinct amodal percept of the invisible light source that can be localized with some precision.

This spatial inference is exposed by smoke or mist in the air that reveals the invisible beams of light as a glowing shaft of illumination slanting through empty space, making explicit that which is perceived only implicitly in clear air. The haze turns the invisible amodal percept of the directed beams of light into a visible modal experience.

The causal connection between a light source and the world it illuminates becomes even more explicit in the case of local light sources that illuminate only local patches of the world. 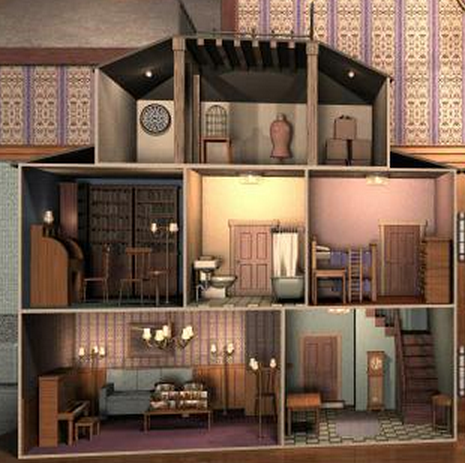 Consider this ray-traced scene of a dollhouse, from the POV-Ray gallery. Notice how each illuminated patch on a wall is accounted for, or “explained” by the light source pointing at it. Without the lamp, the bright patch on the wall might be misinterpreted as an actual discoloration, or bleached stain on the wall. The presence of the lamp helps explain each otherwise anomalous patch of brightness, and at the same time, the patches of brightness reveal and explain the presence of the lamps that are causing them. The cause reveals its effect, at the same time that the effect implicates its own cause.

This exemplifies a recurring theme of one of the most puzzling aspects of perception, of a kind of circular inference, where A implies B, but only if B also implies A, and thus the result cannot be computed in a single pass, but must emerge by a kind of resonance between all parts of the scene, to equilibrate to a globally consistent state. This reciprocal causality is demonstrated most explicitly in the ray-tracing model of mirroring, for example with two mirrors pointing at each other to create an “infinite tunnel” of reflections. In the first iteration each mirror records an image of the other by reflection. In the second iteration, each mirror sees its own reflection in the other mirror, and thus each mirror contains the other mirror in their reflections. In the third iteration each mirror sees the reflection of the other mirror in their own reflection producing three reflections in each mirror, and so on through more iterations potentially to infinity. Performed in analog with two real mirrors and actual light, the computation occurs virtually instantaneously, literally at the speed of light. In the ray-tracing algorithm this kind of cyclic reflection can require some of the most computation intensive processing. In fact the user must specify a limit to the number of cycles if the computation is ever to come to an end. And yet in perception, our automatic and instinctive, almost “unconscious” computation of the illumination source when viewing a scene, also seems to occur virtually instantaneously, thus strongly implicating a parallel analog wave-like computation not unlike the actual light reflecting back and forth between two real mirrors.

The perception of light propagating through space is a necessary prerequisite to the reliable perception of objects in that space, if the sensory evidence for those objeects is the result of their illumination by a light source, and their optical projection on the retina.

I write books and papers on theories of perception and consciousness based on the general insight that our experience takes the form of a spatial structure, and a spatially structure implicates a spatially structured representation in the brain. I propose it occurs by harmonic resonance, or patterns of standing waves in the brain. The brain works more like a musical instrument than as a digital computer. [ Header art adapted from nOzem's Salvia Smoke Mandala http://n0zem.deviantart.com/art/Salvia-Smoke-Mandala-01-155604791 ]
View all posts by slehar →
This entry was posted in Uncategorized. Bookmark the permalink.